Something very exciting happened yesterday. Well exciting in my world at least. We became the proud owners of this: 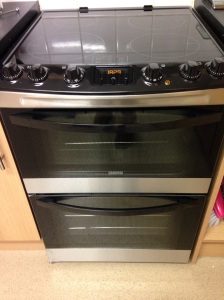 Our old cooker wasn’t just bad, it was in it’s own league of terrible-ness. We live in military housing (the Husband is in the RAF) and for almost seven years now I’ve put up with the issued cooker. For those who haven’t experienced these phenomena, they have a life of their own. They heat up if they want to. Never cool down. And the oven is tiny. I’d had enough.

So I now have an induction hob to play with. I’m ridiculously excited! And I do realise how sad this makes me. So what have I been cooking up then? Well, not a lot actually, as we went out for dinner last night! However, today I had my brother and his family over for dinner before they head back to Sweden, and I made pizza.

Now, I love pizza. And there is nothing easier than chucking a store bought pizza in the oven. Many are excellent (has anyone tried Asda’s fresh pizza – they are a-maz-ing!). But a while back I thought I’d give making my own a try. Admittedly, they’re more work, but they are sooooooo good.

I have a confession though, for the base I use my breadmaker. This is another favourite piece of kitchen equipment (I have a few, so bear with me). I absolutely love my breadmaker, and use it to make everything from the daily loaf, to naan bread, garlic bread, sweet breads, anything ending in ‘bread’. I’ve tried making bread by hand, but it’s never as light as when I use the breadmaker. So I just don’t bother any more. If you’re a keen cook, and don’t already have a breadmaker, I’d highly recommend one.

This was what it produced (the dough just keeps on rising the longer you leave it, and I’d left it a while before I was ready to make my bases). I was making pizza for 3 adults and 6 children (Henry had a wee pal from school staying) so I made 1.5 times the recipe:

Put all your ingredients into the breadmaker in the order above (unless your machine says to add the yeast first), placing the salt and sugar in separate corners and the yeast in an indent in the middle (keep them away from the yeast as they affect it’s ability to work). Then set it to the dough setting and let it work it’s magic. If you don’t have a breadmaker, you can make the dough by hand, or buy dough bases ready made.

Cut your dough into however many portions you want – the beauty of making your own is that you can have individual pizzas (if you all like different toppings) or a couple of hu-uge pizzas. Then roll out – I tend to roll with a rolling pin at first, then use my hands to stretch as much as possible (ok, so I go for the whole throwing it round my head a bit – I’ve yet to chuck one across the kitchen).  Then it’s time to top those bad boys!

I make my own pizza sauce – it’s really easy:

I use frozen chopped onion a LOT. I hate chopping onions. Gently heat your onion in the oil until softening (is it just me, or does this always take longer than recipe books say?) then add the garlic for a couple of minutes. Add in the tomatoes, about a teaspoon of basil (again I love the frozen kind, just so easy but with more taste than dried), the sugar and season. Let it simmer away for a good while (at least 20 minutes) to cook off a lot of the moisture in the tomatoes. Then blitz.

Tonight, I made cheese pizzas for the girls (I like to use the grated cheddar/mozzarella mix you can buy as it has more flavour than just mozzarella on its own – as well as a ball of mozzarella. I never said this was health food), a big meat feast and a veggie for the adults, and the boys got to do their own (letting the girls loose topping pizzas would be like….. actually I’m at a loss for an accurate analogy. It would be bad. Very bad). And these were the results: