I love Christmas. Like, LOVE Christmas. I am one of those folk who starts getting excited in October; who changes their playlist to their ‘Christmas playlist’ in November (everyone has a Christmas playlist right?); and has the tree up punctually on the 1st of December. The Husband thinks I’m hilarious – he tries to be all Bah Humbug but I’m sure he secretly likes it. And since having kids, Christmas has just gotten even better. They’re at an age where they still all fervently believe in the big man. We have an elf (oh yes, we’ve joined the legions of parents panically moving a little felt toy around the house every night), we’ve watched Christmas movies (this is totally indulgent for me to be honest), they’ve made Christmas cards (in Alice’s case, about 10 each for her teacher and TA because they didn’t have any – I hope they’re feeling special),  and they are so excited I’m just waiting for one of them to pop.

There are certain foods that go hand-in-hand with Christmas for me. I always start making sausage rolls around this time. We currently have a freezer full, ready to bake whenever the need arises (pretty much every lunchtime in the Husband’s case). If you haven’t already, do check out my sausage roll recipe here (and team them with my Quick & Simple Lentil Soup). 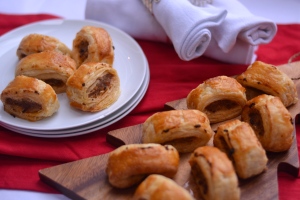 I started making these cupcakes years ago, it was another Delicious magazine recipe. They’re a lovely alternative to mince pies, lighter too, whilst still getting that mincemeat hit. If you’re not a fan of mince pies, but like dried fruit and the gentle spices of mincemeat, these cupcakes could be your perfect option. They’re really simple to make, and you can decorate them however you’d like, they don’t have to be fancy. 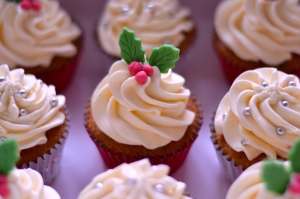 I’m not a fan of brandy, or anything alcoholic near my sugar fix to be honest. Chocolate and liqueur? Bleugh. Boozey trifle?  Wrong-diddley-wrong. Your taking two perfectly good things and completely spoiling them. In my humble opinion. However. When I first made these cupcakes I was making them as a gift, so figured I’d shove in the brandy as per the recipe since they weren’t for me (I’m a totally selfish cook by the way). I did have a little old taste test though. And by jove, these are better with the brandy buttercream. I promise. It’s only a subtle flavour, but it lends itself exceptionally well to the mince pie cakes. 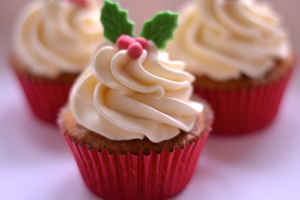 If you have to take a sweet bite anywhere this Christmas, you can’t go far wrong with these cupcakes. I actually made them for my kids’ teachers and TAs. Four teachers and three TAs, I made a box for each class which is possibly a bit cheap, but at this time of year any saving is a bonus!

Homemade Sausage Rolls – You haven’t had a sausage roll until you’ve had a homemade sausage roll!

I always make sausage rolls at Christmas. I don’t know if it’s just me, but to me sausage rolls mean Christmas. We tend to have them on the big day itself, either as a light lunch or a late supper, depending on when we have the main event (this has changed over the years from early afternoon to dinner time – I like it later as it gives me the whole day to prep/eat/drink – I once drank a whole bottle of prosecco whilst making Christmas dinner….but I digress). You get some lovely shop-bought sausage rolls, but if you’ve never made your own, you’re honestly missing out. These are really tasty, and really simple.

Let’s talk pastry. I usually buy the shop stuff. It’s good; it’s easy; it’s convenient. Nine times out of ten, I’ll use a nice block of shop-bought puff pastry. However. During a rather enthusiastic baking spell a few years back, I decided to make my own. How hard could it be? The answer is actually not hard at all. Don’t go believing the theatrics of GBBO. Making puff pastry is not particularly hard. It does take a bit of time, but most of that is to chill the pastry. So I’ve written a separate post here about making puff pastry. However, if you can’t be bothered with that just use a block from the shop. 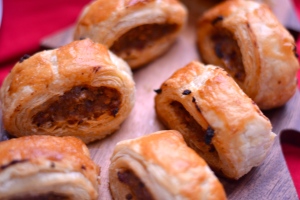 2. In a large bowl mix the filling ingredients together with your hands. Season well. 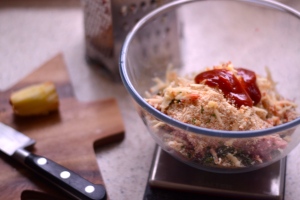 3. Take your pastry out of the fridge. Cut it in half, and roll the first half out on a lightly floured surface to about a 42x10cm rectangle.

4. Take half of your filling and squeeze it out into a long log shape, placing it in the middle of your pastry strip.

5. Brush both long edges with the beaten egg, then fold one side over, followed by the second side, and seal well.

6. Turn the long roll over so the sealed edge is underneath, and place on a tray. Repeat the process for the second roll, then place the tray in the fridge for about 10 minutes to chill. 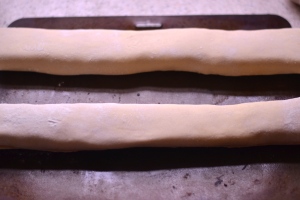 7. Take out of the fridge and cut each into about 12 pieces (or whatever size you like for your sausage rolls). Space out on your baking tray (I tend to spray my tray with cooking oil before placing the sausage rolls on it to prevent them sticking) and brush each roll with the beaten egg.

8. Bake in the preheated oven for 20-25 minutes until golden and cooked through.

If you can resist eating about 5 of these straight out of the oven then you’re a better person than me! 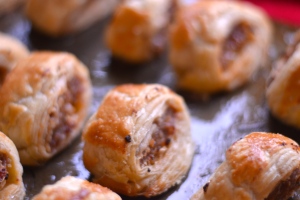 You can also make these to freeze, which is really handy at this time of year:

After cutting them up and brushing with the egg (step 7), place them on a tray, slightly spaced apart, then place them in the freezer for about an hour. No need to cover. Once they’re frozen take them out and pop them in a freezer bag, seal and place the bag back in the freezer until you need them. When you want to cook them, place them on a tray and pop in the oven (same temps) for 30-35 minutes until golden and cooked through. No need to egg wash as you’ve already done this. Easy!

If you’ve got a Christmas party this year that you need to take a nibble to, make some of these, and I promise they will go down well.