This is a really quick and simple pudding, that you can throw together at a moments notice, and that actually tastes really good (despite what it looks like!).

It would appear that spring has sprung in the UK. And just in time (barely) for Easter. Yesterday, we decided to go with the majority and head out into the great outdoors. We took a trip to the lovely Blenheim Palace which is luckily on our doorstep. It would appear that everyman and his dog had decided on Blenheim too.

As we headed out the door, the Husband and I looked at the two modest rucksacks we’d packed. And we paused for a second. Surely we’d missed something? Surely there was at least half a car-loads worth of ‘stuff’ not yet packed? But no! We have (finally) reached a point where we can leave the house without mounting a full-scale expedition. Result!

Trying to then get four children to pose sweetly (or indeed just look kind of in the vague direction of the camera) was, to be fair, never going to happen. But we survived. We didn’t lose anyone. There was no blood, poo or wee involved (that was a different weekend). A pretty successful outing!

Dinner has to be fairly easy when you’ve been out all day, so the kids had my Cheats Tuna Pie, and the Husband and I had leftover lamb. I do like a pudding on a Sunday though. Admittedly, yesterday wasn’t a Sunday, but it was Easter Monday, so as close as dammit. This banana pudding is so quick and easy, you can knock it out in under 15 minutes. The original recipe is another BBC Goodfood recipe, I’ve just tweeked it a wee bit.

1. Place the butter in a 1-litre microwavable dish and microwave until melted (30 second bursts, should take under 1 minute).

Add the 2 bananas and mash into the butter. 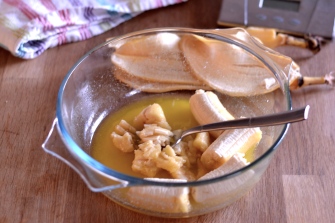 2. Add the sugar and the flour, and give a good thorough mix, either with a fork or a whisk. 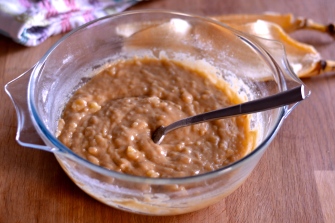 Add the eggs and whisk again.

3. Stir through the vanilla extract (it’s not essential, but it adds extra flavour) and chocolate chips. 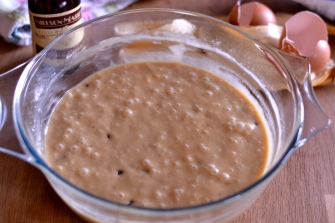 4. Microwave on high for 8 minutes (800W microwave), until slightly risen and cooked through. 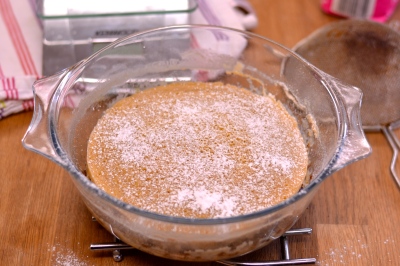 This is not a pretty pudding. I sprinkled it with a little icing sugar before photographing to try to ‘jazz’ it up a little. The chocolate chips tend to sink to the bottom pretty much so you have a layer of chocolate at the base. You could try sprinkling some chips on the top just before microwaving, see how that goes. But this is actually really tasty. I serve it with custard and it tends to go down a storm (except with Alice who ‘doesn’t do pudding’ – she just gets a bowl of custard. I can’t be held accountable for all of my kids). 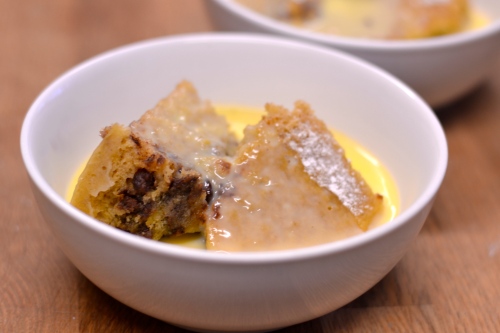 It also uses up any old and browning bananas you might have. Quick, simple, winner.

Busy mum of four, cooking up a storm. View all posts by Sarah Margetts

This site uses Akismet to reduce spam. Learn how your comment data is processed.