I watched a program the other day on BBC One, called Eat Well For Less? It looks at a family’s spending habits in the supermarket. The family featured were spending over £350 a week(!) on groceries. It was fascinating watching. It interested me that an apparently well-educated couple relied so heavily on jars and convenience food – don’t get me wrong, I am totally not dissing the use of jars and convenience food. I usually have some in my stores cupboard for when I want a quick fix. But to fully rely on them is so expensive and often not the healthiest option (compared to cooking from scratch).

The family on this show had four kids, the mum was pushed for time (we can all relate nowadays) and hated cooking (I didn’t realise this was possible??). To be fair, she didn’t trust her cooking skills. So she relied on jars of sauces a lot, including chilli con carne sauce. I was a little surprised (ok, pretty incredulous) that the TV show, instead of teaching her to cook a chilli from scratch – which is so friggin’ simple – they introduced her to cheaper jars? Now it just so happens that I was planning to cook a chilli that day (I know! What are the chances?! 😜).

I wasn’t planning to blog it though. I figured everyone has their own chilli recipe so they didn’t need mine. But maybe there’s more folk out there who don’t realise how easy it is to cook a chilli from scratch? Who use jars of sauce too? If I could help one person to make a chilli – without the use of any jars – who hasn’t before, I’d feel like a pig in the proverbial (my mum’s told me I have to stop swearing on here 😳).

So here it is. My chilli recipe. I slow cook it but you could cook it on the stove, just cook it on low for a couple of hours – mince needs a long, slow cooking to be really good, in my humble opinion. 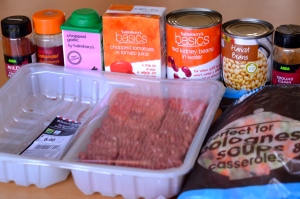 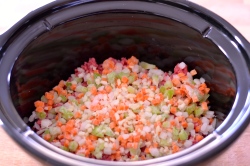 Because I’m incredibly lazy, I literally just threw all the ingredients into the slow cooker, gave them a good mix, turned it to high and let it cook for about 4-5 hours (low for 6-8 hours). Give your chilli the odd stir whilst it’s cooking, and add more water if you feel it looks too dry. Job done. 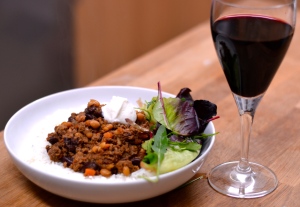 However. Not browning the mince first, does give it a slightly different texture. This doesn’t particularly bother me, especially when it’s just for the family. But if you’d prefer, brown the mince off first in a pan on the stove before tipping it into the slow cooker and adding the other ingredients – if you’re making this on the stove then you might as well brown off the mince first. I’m more inclined to brown the mince first if I’m making it for guests!

A couple of notes:

I used Sainsburys chopped vegetables instead of an onion. I love this product, it’s chopped onion, carrot and celery. I tend to add it to all my mince dishes as you’re adding veg, which practically disappears by the time it’s cooked. Great with kids!

I also added a tin of haricot beans (baked beans without the tomato sauce) because it bulks out the chilli a bit more, and I can sell it to the kids as ‘mince and beans’. I’m always looking for ways to ‘sell it to the kids’ – I sometimes use cannelini or barlotti beans, depending what I’ve got in the cupboard. I only used mild chilli powder, again because of the kids, but obviously make it as spicy as you like. And if you want it a bit more meaty, bacon is a great addition (add when browning the mince).

And in case it interests anyone, I worked out my chilli cost £4.95 in total – but that’s with the extra beans which you could leave out (haricot beans are 60p a can!). And it wasn’t the cheapest mince. It served 2 adults, 4 children, and with a portion to spare. I’m not a ‘budget cook’ per se, but I like to think I don’t spend astronomical amounts unnecessarily (we need all the spare pennies for the wine….). Less than a fiver to feed the family, with lunch for me the next day, I count that as fairly economical. Result!

Busy mum of four, cooking up a storm. View all posts by Sarah Margetts